The Best Time of Year to Visit Mayfair (London) 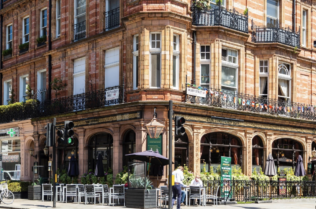 The Best Time of Year to Visit Mayfair (London)

On the far side of the UK Monopoly board, right next to the “Go” square, sits the most expensive property in the game – Mayfair. Take a visit to Mayfair and you’ll see why it’s so highly valued. London is one of the most popular destinations in the world, and Mayfair is among its most desirable locations.

How do you picture London in your mind? Not the London filled with tourist attractions – Big Ben, Buckingham Palace, or the Palace of Westminster – but London’s residential streets. You might be thinking of terracotta terraced homes, wide streets, and quaint shop-fronts.

Not all of London conforms to this idealised image, but it’s fair to say that Mayfair does. 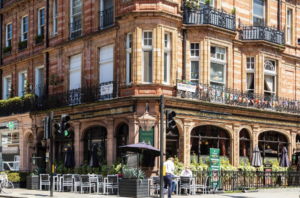 If you’re looking for things to do in Mayfair, you need to know the best time of year to visit.

This isn’t only because of the somewhat unpredictable British weather. There’s an exciting calendar of events taking place in Mayfair and the surrounding areas throughout the year.

Check out what to do in Mayfair before you leave. Forward planning means you can enjoy Mayfair at the time best suited to you. 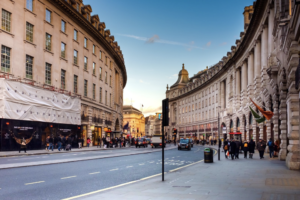 Mayfair is among the best places in the UK to experience during the springtime. Wandering down the Georgian-era Chesterfield Street when the trees are blossoming and the flowers are in bloom, you’ll feel like you’re in the opening scene of Mary Poppins.

The spring weather in Mayfair is a little colder than you might be used to, with an average temperature of just 11.7 ℃ in March and 15.7 ℃ in April, but rising to a pleasantly warm 18.5 ℃ in May. You should find that daytime temperatures are quite comfortable.

Although the UK has a reputation for rain, spring is not as wet as you might think. Mayfair has an average rainfall level of 35 mm in March, 43 mm in April, and 50 mm in May.

Spring is the season that made Mayfair famous. Mayfair gets its name from the annual May Fair that was placed in Great Brookfield from 1686 until 1764. This two-week-long springtime celebration brought visitors from all over London to witness bare-knuckle fighting and eating contests.

Great Brookfield, where the May Fair used to take place, no longer exists. Shephard Market is situated where it used to be. This is a lively part of Mayfair filled with restaurants and small shops. Shepherd Market is well-known for its luxury jewellery stores.

A tribute to the historic May Fair event takes place in Mayfair’s Grosvenor Square over the May Bank Holiday (the first weekend of May).

Visiting Mayfair over the Easter period means you can enjoy an Easter lunch in one of the area’s many pubs and restaurants. Benares at Berkeley Square offers modern Indian food with a British twist. They have a fabulous Easter menu that never fails to impress. It is fine dining, so make you’re dressed accordingly.

If you’re visiting Mayfair on Mothers’ Day, why not treat your mum to an English classic? Try a high tea at the Washington Mayfair Hotel – warm scones, delicate finger sandwiches, and English Breakfast tea. 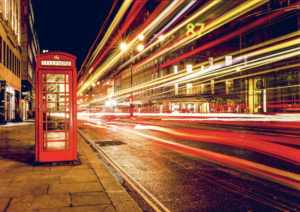 The summer seasons is a great time to visit Mayfair if you enjoy outside dining, long walks in the park, and open-air events.

Summer weather in Mayfair is generally very pleasant. However, you may want to pack a couple of sweaters, just in case. Temperatures vary from an average of 18.2 ℃ in June to 19.2 ℃ in July and 19.3 ℃ in August.

Whilst it’s hardly monsoon season, summer in Mayfair is far from arid. You should probably pack an umbrella, as you might be caught in a few showers. Precipitation levels average at 43 mm in June, 41 mm in July and 48 mm in August.

London is often associated with bustling high streets, smoggy urban living spaces, and its towering financial services district. What many people don’t realise is that London is actually the greenest city in Europe – it’s home to over 3000 parks.

If you visit Mayfair in the summer, it’s easy to believe that London is 40 percent green space. Mayfair is on the edge of Hyde Park, the biggest of four nearby Royal Parks. Open to the public since 1637, Hyde Park is 350 acres of stunning lawns, lakes, and woodland.

In the summer months, Hyde Park’s Serpentine Lido opens for swimming, paddling, and sunbathing. You could also enjoy an afternoon of boating on the Serpentine Lake – perhaps on the Solarshuttle, an elegant, solar-powered craft that drifts peacefully across the lake in the summer.

Hyde Park hosts a number of concerts and festivals over the summer months that are not to be missed. However, it should be noted that Mayfair residents are not entirely happy about some of the noisier events that take place in Hyde Park. In 2012, the microphones were cut on Bruce Springsteen and Paul McCartney mid-song at the Hard Rock Calling festival.

But, the show must go on – Hyde Park’s popular events continue to draw crowds throughout the summer. In July, Hyde Park is host to the British Summertime Festival, which always boasts an impressive line-up. Celine Dion, Stevie Wonder, and Barbara Streisand featured in 2019.

Visiting Green Park should also be on your list of things to do near Mayfair in the summer. You must see the glorious Canada Gate, installed over a century ago, marks the entrance to the wide, tree-lined path known as the Broadwalk.

The Grosvenor Film Festival takes place in June each year, screening popular movies in the iconic surroundings of Mayfair’s Grosvenor Square. The square, developed in 1710, is an attraction in itself, having featured heavily in the novels of Oscar Wilde and Jane Austen.

Mayfair offers more than just outdoors events in the summer. It’s a great time to visit Burlington House, home to the Royal Academy of Arts. The building itself, Lord Burlington’s palace, is breathtaking, and Royal Academy’s Summer Exhibition takes place from June to August. It features a broad range of pieces, from photography to pre-modern painting. 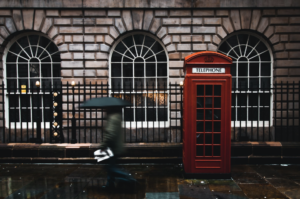 Leafy Mayfair becomes a symphony of colour in the autumn, as the trees turn russet, auburn, and gold. Swans migrate back to Mayfair’s ponds. Shorter days create a cosy atmosphere. In the autumn, you might realise why Mayfair is sometimes known by Londoners as “the Village”

If you’re visiting Mayfair towards the end of autumn, pack a winter coat – the temperature drops sharply. Autumn weather in Mayfair ranges from 17.3 ℃ in September, 13.5 ℃ in October, and 9.9 ℃ in November.

So, with Mayfair’s autumn weather being rather unpredictable, you might prepare to spend some time indoors. This is no bad thing – it provides a great opportunity to visit nearby Soho, an adjoining district to Mayfair whose theatre scene is famous all around the world.

Soho is a historically significant part of London. While it was once known as the city’s “red light district”, Soho has been sanitised since the 1980s. It’s a great theatre district and you’ll be sure to find something that appeals to you. Check out Soho Theatre, which offers interactive community events and comedy workshops.

In late autumn, Mayfair’s Regent Street plays host to the Regent Street Motor Show. The Motor Show showcases cars from the dawn of motoring right up to the modern day. It’s a must-see for any automotive enthusiasts. And it’s a great event for families – the Kids Zone, features model cars, go-karting, and dance shows.

And if you’re visiting Mayfair as a family, London Zoo is a five-minute bus ride from Mayfair, and open all year round. The zoo was established in 1828 and is home to over 20,000 animals. London Zoo has zoological gardens spanning 36 acres to explore. There are daily activities to delight children, such as Tiger Time, Meet the Keeper, and Giraffe High Tea.

November 5th is Guy Fawkes Night (also known as Bonfire Night or Fireworks Night). This is when Brits celebrate the thwarting of an attempt to blow up the House of Parliament.

Standing around outside in the November English weather watching fireworks and eating toffee apples might appeal to you. But if not, you can celebrate Guy Fawkes Night Mayfair-style. Book a table at Galvin at Windows, a restaurant on the 28th floor of Mayfair’s Hilton Hotel, and watch fireworks displays across the whole of London in a more luxurious setting. 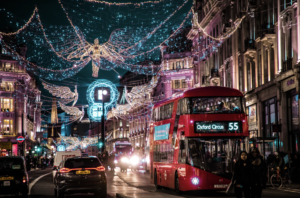 Winter in London evokes images of pubs with blazing fires, street vendors selling chestnuts, and horse-drawn carriage rides. This cliche might not apply all over the city, but Mayfair lives up to the stereotype.

The London winter is actually quite mild compared to many other cities in Northern Europe. Expect an average temperate of 7.0 ℃ in December, 6.7 ℃ in January, and 6.8 ℃ in February.

It snows an average of 17 days per year in London, so you’re very unlikely to get a “white Christmas”. Much more likely is a “wet Christmas”. There’s an average rainfall level of 53 mm in December, 52 mm in January, and 39 mm in February.

But don’t let the uninspiring weather turn you off visiting Mayfair in the winter. It’s a cosy, festive, and fun place to be throughout the colder months.

Visitors to Mayfair in December must make a visit to the Shepherd Market Christmas Party. The cobbled pavements and classic London pubs give this Christmas event a positively Dickensian feel. The Christmas lights are always switched on by a well-known British celebrity. In 2018, for example, Dame Joan Collins led the proceedings.

Over the festive period, nearby Hyde Park transforms into a Winter Wonderland, featuring the UK’s largest outdoor ice-skating rink, ice sculpting workshops, and an ice bar. The Winter Wonderland is unmissable for families visiting Mayfair in the winter period. Kids will love Santa Land, the Magical Ice Kingdom, and the 100+ different rides and games.

There are many great options if you’re in Mayfair for New Year’s Eve. If you’re in the mood for something exotic, grab a Daiquiri at tiki-themed bar Mahiki in Mayfair. This venue is well-known for it’s wild and wonderful New Year’s Eve celebration. Or you could try the exclusive and opulent New Year’s Eve party at Maddox Club – if you can get a ticket. Before your fun night out, be sure to book a table at Benares for a fine-dining experience to end the year right!

For Valentine’s day, check out Cartizze on Mayfair’s New Bond Street. Lovers can get a cocktail from the fully-stocked Negroni Trolley – made right at your table. Or try the Asian-inspired cuisine at Gordon Ramsey’s Lucky Cat restaurant, modeled on the eating houses of 1930s Tokyo.

And winter is surely the best time to visit Mayfair’s ICEBAR – although it’s open all year round. The bar is kept chilly at a constant -5 ℃, and visitors are given a cape and gloves, and “fire cocktails” to keep warm.

Mayfair – the Best of London All Year Round 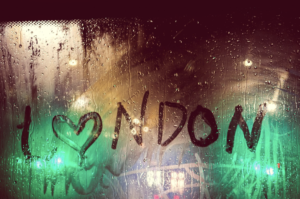 There’s really no bad time of year to visit Mayfair. It’s a historic and beautiful part of London, with plenty to keep you busy in each of the four seasons.

Mayfair is also within walking distance of many important London attractions. Buckingham Palace is just a 16 minute stroll through Green Park. The Palace of Westminster, home to the UK Parliament, is only a half an hour walk away, or 12 minute journey on the London Underground.

So if you love green space, lake swimming, and open-air festivals, the best time to visit Mayfair is spring or summer. If you prefer theatre-going, Christmas markets, and a nice restaurant, come in the autumn or winter!

Whenever you visit, you’re sure to have an unforgettable experience.